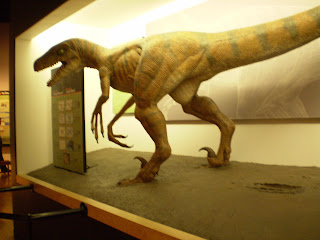 The father of Jurassic Park was critical of "consensus science". Image from the Answers in Genesis Creation Museum.

Science fiction writer Michael Crichton is probably best known for his book Jurassic Park (1990). Its film version began a veritable dinosaur boom around the world. Crichton, who died on November 4, was also a scientist and took an interest in various issues, such as global warming and extraterrestrial life. He could at times be rather critical. He even went as far as suggesting that the search for extraterrestrial life (SETI) was not science. He said, “SETI is unquestionably a religion.”

He went on to point out, “Consensus is invoked only in situations where the science is not solid enough.” Crichton’s lecture suggested that he was not a true believer in global warning, which, of course, is understandable given the haphazard reliability of weather forecasts. He said, “Nobody believes a weather prediction twelve hours ahead. Now we're asked to believe a prediction that goes out 100 years into the future?”

I recently heard a geologist speaking along the same lines as Crichton. He lamented that global warning is more of a religion than science and that the media rarely give critics the chance to respond to articles that regard it as an indisputable fact.

Cricthon’s views do not make him into an anti-environmentalist. He saw the dangers of dogmatic science that instead of evidence was based on consensus, which, after all, might turn out to be less than actual fact.

We need to conserve, recycle and take good care of this planet of ours. But we also need to beware of elevating some scientific “truths” into dogma. This is the legacy of the father of Jurassic Park.