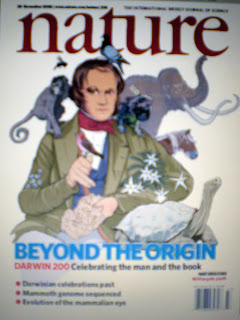 If (Neo) Darwinists were more disciplined, they would celebrate the birthday of their Founding Father on February 12 when Charles Darwin turns 200. However, following the very example set by him they have decided to begin their celebrations in advance. The journal Nature already published a special section on Darwin and we will probably hear a lot more about natural selection before the party is over.

Nature’s editorial Beyond the Origin lifts up natural selection as the prime mover of sorts in evolution although natural selection was known before Darwin’s day, being discovered by Edward Blyth (1810—1873), a British chemist and zoologist who of all things believed in the Genesis account of creation.

In their rush to celebrate, Nature might have forgotten that natural selection can only select from pre-existing genetic material. Everything else would by definition be classified as intelligent design, which from an orthodox Darwinian viewpoint would amount to heresy.

When heaping praise on Darwin Nature cannot be accused of modesty:

Darwin was arguably the most influential scientist of modern times. No single researcher has since matched his collective impact on the natural and social sciences; on politics, religions, and philosophy; on art and cultural relations, and in ways that the man himself would never have imagined.

Charles Darwin had no formal scientific training. His only academic credentials were in theology. However, suffering caused him to doubt the goodness of God. Some 2300 years before Darwin’s time Greek philosophers who only believed in material causes came up with the idea of species slowly changing into other species, which would suggests that Darwin’s hypothesis as such was not much of a novelty.

After the death of his daughter Darwin rejected the Bible’s teaching on human origins and designed a structure in which God was basically superfluous. In The Origin of Species (1859) he potentially reserved a minor role for the Creator but by the time he wrote The Descent of Man (1871) natural processes were all that were needed.

In 1859 Darwin published a theory although he still did not have intermediate fossils or other evidence needed to support his view. He excused this by appealing to the "imperfection of the Geological Record", hoping that the day would dawn when real ape men are found.

We have waited 150 long and weary years. All that we have are a few disputed specimens such as Lucy (a.k.a Australopithecus afarensis) and Archaeopteryx. We lack real evidence. So, would someone please tell me why Nature is heaping an incredible amount of praise on Charles Darwin?