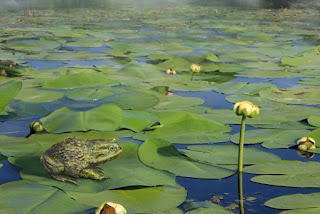 Can you imagine frogs in snow-covered, frigid Antarctica? A recent fossil discovery has significant implications for Earth’s climate history as well as the fossil record.

The frog was said to be 40 million years old. This study brings to mind Noah’s Flood that ravaged the Earth 4,500 years ago. Before that, Antartica was probably  non existent,.

But they have found dinosaur bones in Canada as well as petrified forest in Antartica.