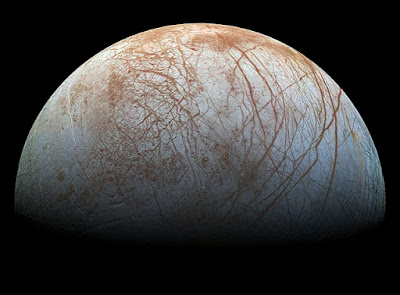 The secularist haven’t given up on finding life, regardless of what it means. this time, it means finding life on Jupiter's moon Europa.

“Monica Grady, who is a professor of Planetary and Space Science at Liverpool Hope University, suggests the icy seas beneath Europa's surface is a prime location to find beings with similar intelligence to the marine animal.

Brady also thinks that the deep caverns and caves on Mars may also be harbouring life-forms, as these areas provide relief from the intense solar radiation.

'When it comes to the prospects of life beyond Earth, it's almost a racing certainty that there's life beneath the ice on Europa,' she said.”

She obviously thinks that given an earth-like atmosphere, evolution would give life to those that are without it. However, life only come from life. It has to be created .

Liberatore, Stacy. 2020. British scientist says it is 'almost a racing certain' that the icy seas on Jupiter's moon Europa are home to alien life that are 'octopus-like creatures' Daily Mail 7 February.