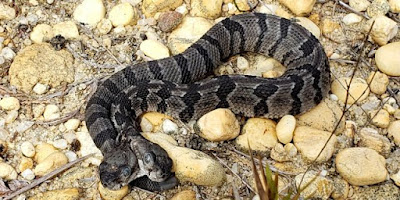 This might just be the think the Darwinists were hoping for- a snake with two heads, That’s is, they have gene duplication and hox genes, so why not?

However, not even Darwinists expect this to be so. “Bob Zappalorti, the CEO of the Herpetological Associates of Burlington County, an environmental consulting company that studies endangered reptiles and birds, among other animals, told the news outlet the snake ‘probably wouldn’t be able to survive in the wild.’”

”According to National Geographic. The rare genetic abnormality can hinder the snake’s ability to catch prey.

“Two-headed snakes are rare and typically do not survive for long in the wild, Snakes operate a good deal by smell, and if one head catches the scent of prey on the other's head, it will attack and try to swallow the second head,” National Geographic explained, adding two-head snakes develop similarly to Siamese twins when an embryo does not properly split into two.