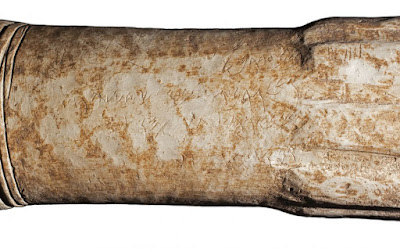 A 2,800-year-old altar found in the in the ancient city of Ataroth in Jordan, may shed light on an ancient biblical war. It describes a rebellion against the Kingdom of Israel.

”The altar bears two inscriptions. The words are in the Moabite language and script, while the numerals in the inscriptions are in Hieratic (an Egyptian writing system). The altar appears to date to a time after Mesha, king of Moab, successfully rebelled against the Kingdom of Israel and conquered Ataroth (sometimes spelled Atarot), a city that the Kingdom of Israel had controlled.“

At this time, Israel had broken into two. the northern kingdom had retained the name Israel and the southern kingdom called Judah.

"The altar reveals new details about a rebellion against the Kingdom of Israel", as described in the Bible.

It was Israel’s sin that brought the division of the land in two. However, the altar shows that the history of Israel, told in the Bible, can be trusted. as God never lies.