The Bible – A Collection of Old Nomadic Tales? 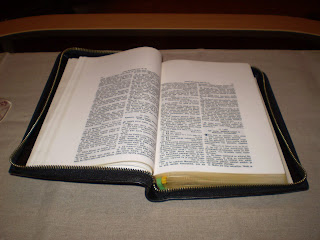 
I have often stumbled upon the view that the Bible cannot be a reliable source of faith and conduct since it consists of old nomadic tales. Many people assume that nowadays we know a lot more about things than the ancient Israelites did.

In reality, the Bible has little to do with nomadic tales. The author list of the Old Testament will reveal surprising insights for those who assume the Israelites were uneducated pastoralists. Moses was educated among the pyramid-building Egyptians. David and Solomon were kings, and Daniel had a high political office in Babylonia.

The view that the ancient Israelites were ignorant peasants has become an urban legend that has continued to live a life of its own despite the evidence.

Moreover, none of the New Testament authors was a nomad. Paul was a learned theologian and Luke a doctor. Doctors were not simpletons even in Bible days.

The old writings in the Bible include surprisingly timely teachings. The Bible was ahead of the times even in many small details: ”Go to the ant, you sluggard; consider its ways and be wise!” Proverbs 6:6 exhorts us. This is no empty plea: Some ants are capable of building anthills that are over 9 metres (30 feet) high.

Taking their size into account, humans would have to erect buildings that are over 2 kilometres (1.25 miles) high to be able to compete with these clever builders.

Jesus exhorted us to look at the birds of the air. Researchers have only recently begun to comprehend how intelligently small birds are designed. Robins, for instance, use so advanced quantum technology in navigating with the help of Earth’s magnetic field that in spite of decades of research humans have been unable to catch up with these tiny birds.

The Bible’s spiritual teachings are not outdated, either. The apostle Paul wrote in Romans that the gospel is "the power of God that brings salvation to everyone who believes”. It is not merely theory but the gospel also works in practice in our time. There is plenty of empirical evidence for this.

The gospel changes the person who accepts the salvation that God offers.