God has given mankind a stage on which to perform, Apollo 8 astronaut Jim Lovell says 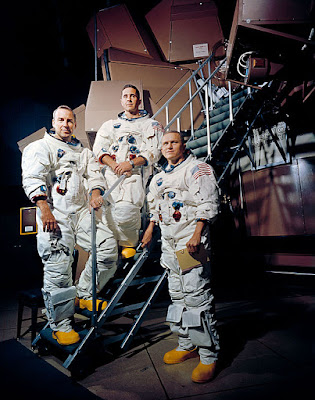 The Apollo 8 astronauts have been alive on tv in Britain.

One of them, William (Bill ) Anders, has said that sending astronauts to Mars would be stupid.

Speaking to BBC Radio 4's PM, their crewmate Jim Lovell also reflected on the Earthrise moment: "When I looked at the Earth itself... I started to wonder why I was here, what's my purpose here… it sort of dawned me," he said.

"And my perspective is that God has given mankind a stage on which to perform. How the play turns out, is up to us."

They were the crew who send the tenth first verses from Genesis 1 to the world, “In the beginning God created the heaven and the earth. And the earth was without form, and void; and darkness was upon the face of the deep. And the Spirit of God moved upon the face of the waters. And God said, Let there be light: and there was light. And God saw the light, that it was good: and God divided the light from the darkness.

And God said, Let the waters under the heavens be gathered together unto one place, and let the dry land appear: and it was so. And God called the dry land Earth; and the gathering together of the waters called the Seas: and God saw that it was good.”
The idea was Frank Borman’s.