The Century Plant and Many Animals Challenge Convergent Evolution 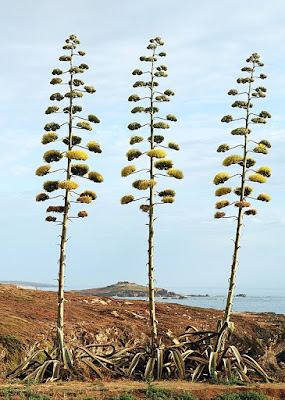 Agave americana blooms only once, at the end of its longish life. Image courtesy of Alvesgaspar, CC BY-SA 3.0.

A recent article in Nature questions the concept of convergent evolution or the idea that unrelated species share traits.

Kevin Padian mentions a number of creatures “whose adaptations have never been duplicated: the kangaroo, the platypus (Ornithorhynchus anatinus), the century plant (Agave americana, which blooms only once in its multidecade life) — and humans.”

He could also have mentioned the bombardier beetle, the aardvark, the star-nosed mole and the spiny anteater, for instance.

Agave americana, also known as the century plant, resembles an aloe though it is not closely related to them. While it can live up to 30 years, it only blooms once, at the end of its life, reaching a height of 8–9 metres (25–30 feet).

Like many other organisms, it defies Darwinian assumptions – in a big way.