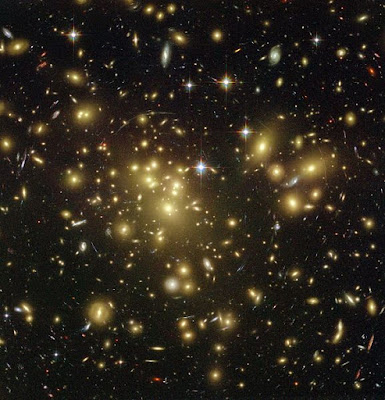 This summer has not been good for dark energy, one of the several unknown factors used to prop up the Big Bang. Some astronomers want to get rid of it.

And now it seems that dark matter is faring even worse. A two-year search for this elusive stuff found absolutely nothing.

Astronomers believe that this stuff should “be made up of particles that have some mass and interact weakly with other matter,” as New Scientist puts it; hence the name weakly interacting massive particles, or WIMPs.

But a fancy name does not mean that it really exists. In the standard model, i.e. the Big Bang, dark matter is needed to keep galaxies together, otherwise they might fly apart and the universe would be a mess.

Writing in New Scientist, Jacob Aron says: “What’s unknown is how often these particles bounce off each other – their scattering cross section – and their mass. They should also occasionally bump into normal matter. These rare collisions are what experiments like the Large Underground Xenon detector (LUX) are designed to pick up, in order to determine WIMPs’ properties.”

But they didn’t find “a single whiff”.

Basically, the Big Bang model says that in the beginning there was a quantum fluctuation that occurred for no reason at all, and then the universe suddenly accelerated for no reason, breaking all cosmic speed limits during a brief epoch called inflation.

The BB model should have produced as much antimatter as there is matter and thus blown everything up.

Obviously, it didn’t. Instead, we see a finely tuned universe in which early galaxies grew too fast for the Big Bang.

Everything in our cosmic neighbourhood points to Divine foresight.

God by His sovereign wisdom created a habitable place for us.