Almost Like Eden: Lioness Herds Sheep Instead of Eating Them 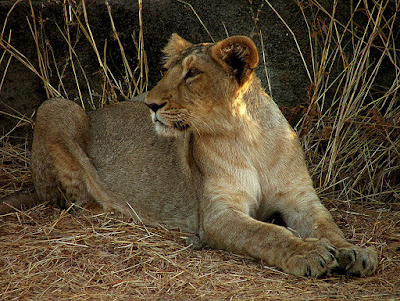 A lioness in India. Image courtesy of Rupal Vaidya, Creative Commons (CC BY 2.0).

On a farm in Russian Dagestan, a lioness runs after a flock of sheep.

But instead of having them for dinner, Mashka rounds them up. She herds them like a sheep dog and brings them home.

The lioness has been on the farm since she was a cub. The farmer says that she’s very obedient.

She does eat meat, though, but only the beef that her owner gives her.

According to the Darwinian story, nature should be red in tooth and claw. However, at times it isn’t.

Even more or less fierce felines can defy evolutionary expectations.

Recently, we heard of a cat on an Irish farm that adopted ducklings.

This reminds us of Eden, when bad things had not yet happened. Thorns did not grow, and death did not reign in the animal kingdom. Small creatures did not fear big ones or even humans.

Hybrid felines, such as a liger and savannah cat, suggest that Genesis is a more credible source on the cat kind than The Origin of Species.