Blind Cave Salamander: Loss of Eyesight Is No Evidence for Evolution 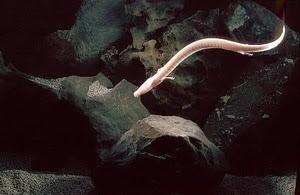 New Scientist compares it to Gollum, Tolkien’s Hobbit that in better days used to be known as Sméagol. The tiny blind salamander found in Slovenia can survive for a hundred years on almost nothing.

The olm Proteus anguinus can grow to roughly 25 centimetres or 10 inches. It has very feeble feet.

Evolutionists often use blind animals, such as cave crabs or blind archids, as evidence for Darwinian evolution, but the change is in the wrong direction.

It’s the same kind of story with flightless birds like emus.

Losses seldom if ever amount to gains in real life. Mutations or spelling mistakes don’t run the show.