Time to Admit: There’s No Life on Mars 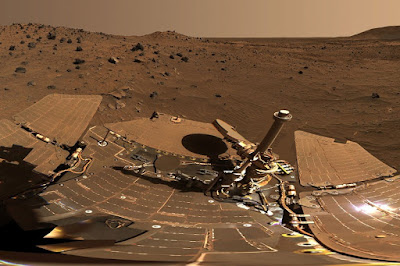 Not so long ago, many people thought there might be at least some forms of life lurking beneath the red planet’s surface. Some even saw Earth’s life coming from Mars via meteorites.

However, now it seems that Mars is a barren planet, devoid of life. A recent article in New Scientist asks:

“WHEN can we declare the Red Planet a dead planet? Although most efforts so far have gone toward showing that other planets could support life, now is the time to think about the other side of the coin.”

The writer seems to be more concerned with life eventually reaching Mars from Earth than the other way round:

“Spacecraft going to other worlds must follow costly planetary protection protocols, such as sterilisation, to avoid contaminating their destination with Earth microbes, putting any native life at risk, or bringing potentially dangerous alien ones back.

But if there’s nothing there, why bother? We haven’t found life on Mars yet, and if further missions also turn up nothing, at some point commercial space enterprises such as mining operations or tourism will want to avoid the costs of sterilisation.”

Life does not just happen. It has to be designed and created.

The more we get to know about other worlds, the more evident it becomes that ours is a very special place.

There’s no place like home elsewhere in the universe (except eventually heaven, which is similar but much better).

Earth was created to be our home planet.