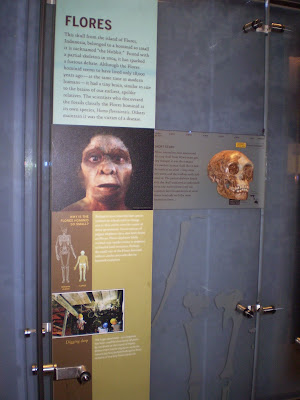 A reconstruction of Turkana Boy, the best-known H. erectus specimen.

Not so long ago Darwinists assumed that only H. sapiens was capable of creating art. However, last year the Neanderthal hashtag made news, challenging this view.

Previously, Neanderthals were known to be inventors, mariners and
even otherwise technologically advanced.

Now, Homo erectus is on its way to lose its apeman status. According to a recent letter in Nature:

“The manufacture of geometric engravings is generally interpreted as indicative of modern cognition and behaviour. Key questions in the debate on the origin of such behaviour are whether this innovation is restricted to Homo sapiens, and whether it has a uniquely African origin. Here we report on a fossil freshwater shell assemblage from the Hauptknochenschicht (‘main bone layer’) of Trinil (Java, Indonesia), the type locality of Homo erectus discovered by Eugène Dubois in 1891. In the Dubois collection (in the Naturalis museum, Leiden, The Netherlands) we found evidence for freshwater shellfish consumption by hominins, one unambiguous shell tool, and a shell with a geometric engraving. We dated sediment contained in the shells with 40Ar/39Ar and luminescence dating methods, obtaining a maximum age of 0.54 ± 0.10 million years and a minimum age of 0.43 ± 0.05 million years. This implies that the Trinil Hauptknochenschicht is younger than previously estimated. Together, our data indicate that the engraving was made by Homo erectus, and that it is considerably older than the oldest geometric engravings described so far. Although it is at present not possible to assess the function or meaning of the engraved shell, this discovery suggests that engraving abstract patterns was in the realm of Asian Homo erectus cognition and neuromotor control.”

In other words, H. erectus knew about geometry and was able to create art.

This makes the case for human evolution to be very weak and it is a hard nut to crack for progressive creationists like Hugh Ross who regards H. erectus as a soulless apeman.

The Genesis-based model has always seen Neanderthals and H. erectus as fully human. They lived during the post-Flood era.