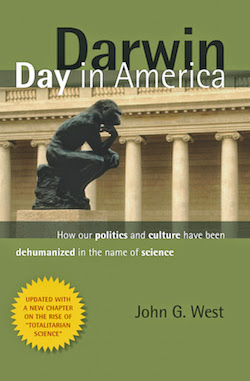 Darwin Day (12th February) is almost here, and the faithful are already making preparations for celebrating it with pomp and circumstance. In a naturalistic /materialistic worldview, it is the closest thing to Christmas.

It is obvious that they don’t like Christmas, especially if it includes the word Christ – and they don’t want you to like it, either.

But they want you to celebrate Evolution Sunday in church, which, of course, would be a form of idolatry. After all, Charles Darwin wanted to do away with God who reveals Himself in human history as Creator and Saviour.

What are the likely consequences of an ideology based on the belief that apart from nature, nothing else exists?

Dr. West, Vice President of the Discovery Institute and Associate Director of the Center for Science and Culture, says:

“Our culture is witnessing the rise of what could be called totalitarian science—science so totalistic in its outlook that its defenders claim the right to remake every sphere of human life, from public policy and education to ethics and religion. Science is a wonderful enterprise, but during the Obama era, it’s being twisted in ways that are unhealthy for both science and society.”

During Obama’s presidency, science has eroded freedom and secularists have sought to silence all dissenting views in the public arena. They want to remove Christian morality and replace it with a vague Darwinian ethics. This leads to a gross devaluation of human worth, including experimenting with humans, which smacks of what Josef Mengele did at Auschwitz-Birkenau.

Dr. West says that Mr. Obama endorsed the Cosmos television series hosted by astrophysicist Neil deGrasse Tyson, who has not hidden his anti-Christian agenda under a bushel.

West also mentions Princeton bioethicist Peter Singer, who believes that “the life of a newborn baby is of less value than the life of a pig, a dog, or a chimpanzee.”

This is diametrically opposed to the Christian gospel, which sees mankind as special. After all, Jesus only became a human being. He only redeemed mankind, not animals.

Over half a century ago, C. S. Lewis warned of the dangers of scientism. This is something that all too many of today’s scientists have chosen to ignore.