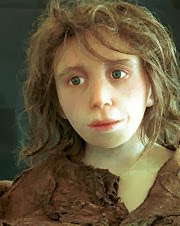 We have all heard that cavemen were primitive. It might not be easy to think of them as inventors. However, recent research suggests that Neanderthals, once dismissed as grunting, stooped cavemen, were much more sophisticated than scientists previously assumed. In recent years, they have evolved – in science publications, that is – from dim-witted ape-like creatures to human inventors.

A new discovery suggests that Neanderthals were the first to use string. According to New Scientist:

“Perishable materials usually rot away, so the oldest string on record only dates back 30,000 years. But perforations in small stone and tooth artefacts from Neanderthal sites in France suggest the pieces were threaded on string and worn as pendants. ‘The wear patterns provide circumstantial evidence of early use of string, but the evidence is not definitive,’ says Bruce Hardy at Kenyon College in Gambier, Ohio. Similar circumstantial evidence has been found in perforated shells.

Now, Hardy and his colleagues have found slender, 0.7-millimetre-long plant fibres that are twisted together near some stone artefacts at a site in south-east France that was occupied by Neanderthals 90,000 years ago. Such fibres are not twisted together in nature, says the team, suggesting that the Neanderthals were responsible (Quaternary Science Reviews, doi.org/pzx).”

Once upon a time, some 150 years ago, Neanderthals were “proof” that humans had evolved from ape-men. But it seems that the times they are a-changing.

The model based on Genesis has regarded Neanderthals as fully human from the beginning.

(You can read more about Neanderthals here and here.)