Jesus and the Repentant Robber 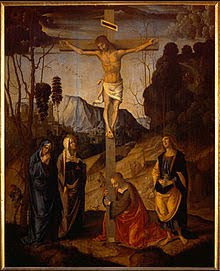 Luke narrates a dialogue between Jesus and the repentant robber on the cross. After one of the two robbers who were crucified with Jesus mocked Him, the other condemned man pleaded: “Jesus, remember me when you come into your kingdom.”

According to an old unorthodox doctrine, after His death Jesus went to hell where He was tormented for three days by Satan. This “Jesus died spiritually” (JDS) doctrine obviously stems from the writings of E. W. Kenyon, who introduced the idea to Kenneth Hagin. After Hagin, the JDS doctrine has been taught by Kenneth Copeland and Joyce Meyer, for instance.

Now, if Jesus went to paradise, He obviously could not have been tormented in hell at the same time. Although as God Jesus can be omnipresent, the JDS doctrine sounds like the Schrödinger's cat paradox with a cat being dead and alive simultaneously.

The JDS doctrine claims that Jesus died twice, first as a human being and then as a spirit being. This view has a basic problem: it is not supported by the Bible. Several New Testament passages say that Jesus atoned for the sins of the world on the cross.

“It is finished,” Jesus said as He was dying. There was no need for Him to die a second time.

While some New Testament verses, such as 1 Peter 3:19 and Ephesians 4:9-10, seem to indicate that Jesus did indeed descend into hell, Scripture never says that Satan had the power to torment Jesus there. In contrast, it states that Jesus preached to spirits, not that He was tormented by them. Furthermore, a spirit being cannot die, so the JDS doctrine is totally without scriptural support. It adds something to the Bible that is not there. When measured by biblical standards, it falls apart completely.

The apostle Paul points out in Colossians 2: 15 that Jesus defeated the forces of the evil one on the cross: “And having disarmed the powers and authorities, he made a public spectacle of them, triumphing over them by the cross.”

Jesus’ victory was completed on the cross. There was no need for Him to suffer any more after that.
Lähettänyt bwanajoe klo 07:44