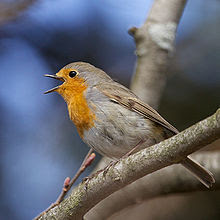 
I have often watched European robins (Erithacus rubecula) flying around my garden. However, I have never realised just how clever these little birds are. Until now, that is.

According to Wired Science:

“European robins may maintain quantum entanglement in their eyes a full 20 microseconds longer than the best laboratory systems, say physicists investigating how birds may use quantum effects to ‘see’ Earth’s magnetic field.

Quantum entanglement is a state where electrons are spatially separated, but able to affect one another. It’s been proposed that birds’ eyes contain entanglement-based compasses.”

Understandably, Benjamin is puzzled: “How can a living system have evolved to protect a quantum state as well — no, better — than we can do in the lab with these exotic molecules?” he asks.

The answer is not blowing in the wind. The surprisingly smart navigation skills of these tiny birds speak of intelligent design that cannot be explained by Darwinian evolution.

The ingenious design of these robins suggests that they have been created supernaturally by an all-powerful God.