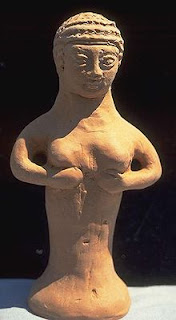 Ancient Israelites worshipped both God and a goddess in their temple, says theologian Francesca Stavrokopoulou, who wrote the programme. She says that the Old Testament book of First Kings reveals that women wove ritual textiles for Aserah, whose statue was kept in the temple at Jerusalem.

Stavrokopoulou has previously claimed that Moses did not exist.

Doctor Stavrokopoulou brings up a piece of pottery discovered in the Sinai Peninsula, dated in the 8th century B.C., that mentions Yahweh and his Aserah. She deduces that Aserah had to be Yahweh’s spouse.

There is a major problem related to the discovery: the original shard has been lost and only copies are left. The antiquities authorities of Israel and Egypt say they do not know what happened to the original.

Stavrokopoulou steps into the intriguing world of conspiracy theories by suggesting that perhaps an ardent defender of the Bible might have hidden it.

However, the Bible has nothing to fear from archaeology, as discoveries have often provided support for its history. (Read more here, here, here, here and here.)

Dr. Stavrokopoulou says her interest in the Bible sprang from her fascination with her Greek heritage. The gods and goddesses of Mount Olympus led a rather colourful life and did not lack spouses.

Stavrokopoulou seems to have used her background rather creatively and assumed that Yahweh resembles the mythical inhabitants of Mount Olympus.

Whereas the Greek tales of gods and goddesses are myths, the Bible describes real historical events.

It is good to keep in mind that the Israelites began to worship Aserah after they had forsaken the living God. Many Old Testament prophets warned of idolatry and Eliah, for instance, fought a historical battle against the priests of Baal and Aserah on Mt. Carmel.