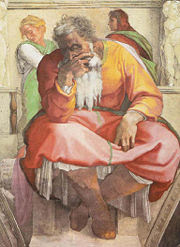 Jeremiah, the "Wailing Prophet", by Michelangelo. Image from Wikipedia.

The Old Testament book of Jeremiah mentions Gedaliah, son of Pashur, who served as a minister during king Zedekiah’s reign (597- 586 BC). Zedekiah was the last king of Judah before the Babylonian captivity.

Recently, a piece of clay bearing a seal impression with the name Gedalyahu ben Pashur (Gedaliah, son of Pashur) was found in Jerusalem. The bulla, as the seal impression is called, supports the historical reliability of the book of Jeremiah. Professor Eilat Mazar, who led the excavations at the southern side of the Temple Mount, reported the find to the Jerusalem Post.

Three years ago professor Mazar’s team found a seal impression with the name Jehucal son of Shelemiah (Yehukual ben Shelemyahu) in the same area. Jehucal was also a minister during the reign of king Zedekiah. The 38th chapter of Jeremiah states that these two men persuaded the king to put Jeremiah to death since he had predicted that the Babylonians would conquer Jerusalem.

However, Zedekiah had Jeremiah thrown into a cistern instead. The “wailing prophet” was eventually rescued.

Jeremiah’s prophecy was fulfilled in 587 BC when Nebuchadnezzar’s troops took the city, bringing an end to Judah’s independence.

Mazar’s excavation team has previously unearthed a part of the city wall built by Nehemiah during the post-captivity era.

In 2007, assyriologist Michael Jursa found a clay tablet in the British Museum that dated from the tenth year of king Nebuchadnezzar’s reign (595 BC). The Assyrian tablet mentions that a chief officer called Nebo-Sarsekim brought gold to the temple. This is an interesting detail since Jeremiah 39:3 also speaks about an officer called Nebo-Sarsekim.

Once again archaeology supports the historical reliability of the Bible. Instead of being full of myths, the book of Jeremiah, like the entire Bible, describes real people who were part of real, verifiable history.

You can read more about the reliability of the Bible here.