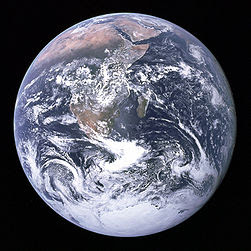 According to Genesis, there was plenty of water on Earth from the beginning. Image courtesy of NASA.


Genesis describes a planet that had plenty of water from the beginning. In contrast, secular interpretations of science have assumed that Earth began as a hot molten planet that got its oceans later during its history.

However, secular views are beginning to change (read more here and here).

Linda Elkins-Tanton, a geologist at the Massachusetts Institute of Technology, will soon publish a study in the journal Astrophysics and Space Science. It suggests that the water on Earth did not come from asteroids or comets.

Elkins-Tanton analysed the chemical composition of meteorites and used the data in simulations of the early state of Earth-like planets. According to ScienceNOW, “Her models show that a large percentage of the water in the molten rock would quickly form a steam atmosphere before cooling and condensing into an ocean.”

Researchers have been puzzled by how Earth got its water surprisingly quickly – in only some tens of millions of years.

The answer is not blowing in the wind. It can be found in Genesis. There was plenty of water on Earth already on the first day of creation. There is no need to assume that it took millions of years to get liquid water to Earth.