The Gates of Auschwitz Opened 65 Years Ago 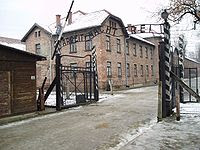 Arbeit macht frei? These gates were opened 65 years ago. Image courtesy of Wikipedia.

Soviet troops liberated the remaining prisoners of Auschwitz on January 27, 1945. It marked the end of one of the darkest and grisliest periods of Polish and German history.

The racist ideology of the Nazis had its roots at least partly in the writings of Ernst Haeckel. A zoology professor, Haeckel (1834-1919) spread the good news of evolution in central Europe in the late 19th century and early 20th century.

Nowadays, Haeckel is mostly remembered for his faked embryo drawings. His views on race are less well known. Like Charles Darwin, Haeckel thought that the coloured ”races” were not as evolved as the white ones.

The German Nazis assumed that their racial ideology was based on good science. The consequences of that ”science” turned out to be extremely horrible.