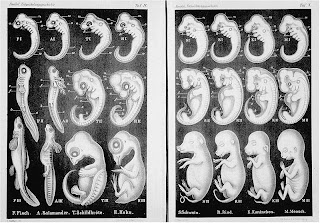 Ernst Haeckel’s embryo diagrams were known to be fraudulent 135 years ago. Image courtesy of Wikipedia.

Richard Dawkins used Ernst Haeckel’s fake embryo diagrams as evidence for evolution in the TV series The Genius of Charles Darwin, which was filmed in 2008. At least some episodes are on You Tube.

In 1866 Ernst Haeckel published his notorious embryo diagrams in the book Generalle Morphologie der Organismen. He speculated that different species resemble each other during the early stages of their development. According to this hypothesis, humans go through a fish stage before birth.

During Haeckel’s lifetime, some scientists doubted his explanation. Already in 1874 professor Wilhelm His said that the drawings were fraudulent.

In 1997 Michael K. Richardson and colleagues published images of what the embryos really look like in the journal Anatomy and Embryology. They differed diametrically from Haeckel’s illustrations.

Both Science and New Scientist reported on Richardson’s findings. This should have been the death knell for Haeckel’s fraudulent drawings.

Now it seems that either Richard Dawkins does not read science journals or he does not bother to look at articles that pose hard questions for Darwinian evolution.

Or perhaps he thinks that it is permissible to use misleading evidence in a struggle between worldviews.

Recently, Richard Dawkins turned down an invitation to debate Stephen Meyer on evolution. Doctor Meyer’s book Signature in the Cell was published a few weeks ago.

This was not the first time when Dawkins refused to discuss Darwinism with its critics. For instance, a year ago he turned down the chance to debate the Turkish evolution skeptic Harun Yahya.

Dawkins would hardly have been successful in any debate had he used Haeckel’s embryo drawings as proof of Darwinian evolution.