LiveScience: The less religious people are, the more likely they are to engage in celebrity worship 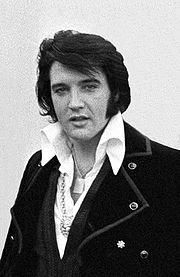 To commemorate Elvis Presley’s 75th birthday, LiveScience published an article on celebrity worship. Elvis, after all, was probably one of the earliest pop stars to have attracted a sizable following of swooning fans.

In the article, LiveScience editor Jeanna Bryner discusses what kind of people worship pop stars and other celebs and in what kind of circumstances. She concludes that in addition to one’s personality type and psychological state, religion, or rather the lack of it, also plays a major role in determining whether one engages in celebrity worship.

James Houran, a clinical psychologist, says that the less religious a person is, the more likely he or she is to worship celebs. It is easier for a non-religious person to worship George Clooney instead of Jesus.

Humans seem to have a natural inclination to worship someone bigger than they are. A Christian will worship the God of the Bible. An individual who is not religious will find an alternative object of worship, for instance another person or nature.

It is called Christianity and it has to do with a relationship with the Creator of the universe.

Elvis Presley had a Christian background. He also sang gospel songs such as He Touched Me at the height of his career.