New Evidence for the Crucifixion Found 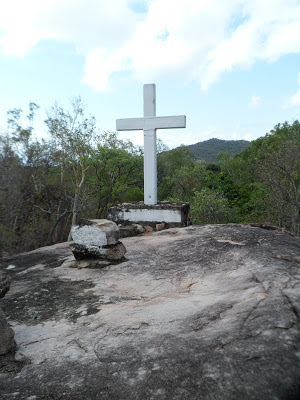 This cross is on Magnetic Island, near Townsville, Queensland.

The Gospels describe the crucifixion of Jesus in much detail. The Apostle Paul also states that it was the fulfilment of prophesy:

“For what I received I passed on to you as of first importance: that Christ died for our sins according to the Scriptures.” (1 Corinthians 15:3, Berean Study Bible).

A new paper published in the journal Archaeological and Anthropological Sciences provides evidence for this Roman method of executing criminals.

“A new study of the skeletal remains of the man, found near Venice in 2007, reveals a lesion and unhealed fracture on one of the heel bones that suggests his feet had been nailed to a cross…

The skeletal remains were found at Gavello, about 25 miles (40 kilometers) southwest of Venice, during archaeological excavations in preparation for the laying of a pipeline, the researchers said in their study.”

“A depressed, unhealed fracture in the heel bone suggested a metal nail had been driven through it, from the inside to the outside of the right foot, either directly onto the wood of a cross or into a wooden footrest attached to a cross.

‘We found a particular lesion on the right calcaneus [heel bone] passing through the entire bone,’ lead study author Emanuela Gualdi, a medical anthropologist at the University of Ferrara, told Live Science in an email.”

When the Bible describes historical matters, it always gets the facts, including the tiny details, right.

Secular ancient writers were unable to deny the historicity of Jesus.

Archaeology confirms that the Bible is history. The Bible tells us about real people and real events, such as the earthquake mentioned by the prophet Amos and the one that occurred during Jesus’ crucifixion.

We should not be surprised, as Jesus Himself says in John 17:17 that God’s Word is truth.