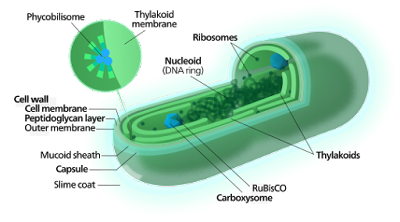 Cyanobacteria, or blue-green algae, as they are also called, are assumed to be one of the oldest life forms on our planet. Evolutionists would believe that they appeared over “3 billion years” ago.

This means that they are evolution’s oldest living fossils.

Yet, they are anything but simple. According to an article posted on Phys.org, they

“have an ingenious system to prepare themselves for the coming daylight when it is dark by setting up a large 'antenna'. This antenna helps them capture light energy in an efficient way, while also providing protection against damage to the photosynthesis mechanism of the bacteria.”

“This revolutionary discovery about the functioning of the antenna was made by the Laboratory of Biophysics of Wageningen University. ‘Enhancing the photosynthesis of our crops is as important as the Green Revolution has been’ says Eric Schranz, professor in Biosystematics. ‘To achieve this improvement we need new and very detailed information about the possibilities which nature provides. This new knowledge is therefore a major breakthrough.’

Once again, we see an elegant solution in nature that inspires scientists to mimic what they observe. (Read more here, here and here.)