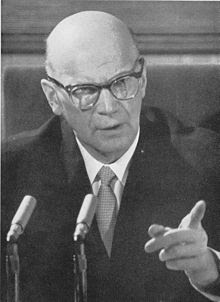 Selection advantage, perhaps? Dr. Urho Kekkonen was president of Finland from 1956 to 1981. Image courtesy of Wikipedia.

Darwinian just-so stories are not about to become extinct. One of the more recent ones has to do with the lack of hair. “Why haven't bald men gone extinct?” Rob Dunn asks in this week’s issue of New Scientist magazine:

“The intriguing question, the one likely to lead to more mysteries than a simple resolution, is why bald men exist in the first place. Baldness is extremely rare in nature. It remains unclear why, and when, our ancestors lost most of their fur (New Scientist, 24 March 2012, p 34) but there is general agreement that the few hairy bits we retained serve particular purposes.”

Dunn goes on to propose a few selected explanations of why we have hair:

“The hair on our heads may protect us from the noonday sun, maintain body heat when it is cold, and even attract a mate. If so, men who lose their hair are at a disadvantage, and you would expect natural and sexual selection to have weeded them out. So why haven't bald men like me, or at least our versions of genes, gone extinct?”

According to the evolution model, natural selection should have eliminated traits that are harmful. Thus, so the story goes, there must be some sort of blessing in disguise for losing one’s hair:

“Perhaps, then, baldness has some survival advantage in human males, which allowed it to evolve. One suggestion is that it signals dominance and status. A bald pate might serve as a sort of advertising board for emotions, in particular the red flush that accompanies anger. In nature, red is often the colour of dominance, making an angry bald head the equivalent of a wordless but very clear statement of ‘Don't mess with me!’ "

Dunn has not yet said the final word, though: “A recent paper suggests baldness allows more sun to penetrate through the skulls of ageing men. This increases the generation of vitamin D and helps to forestall prostate cancer (Medical Hypotheses, vol 70, p 1038).”

However, when anything and everything has to be explained away by fact-free storytelling, the theory behind the explanations might well be facing hard turbulence.