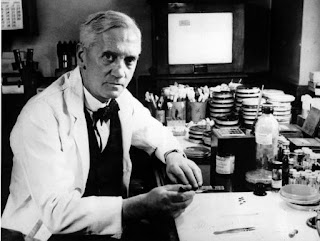 Alexander Fleming was awarded a Nobel Prize for his discovery of penicillin. Many people assumed that antibiotic resistance in bacteria evolved during the past 70 years or so, but recent research shows that this is not true. Image courtesy of Wikipedia.


Evolutionists often claim that bacteria have evolved to resist antibiotics. The popular press calls this evolution in action.

However, a paper published in the journal Nature in 2011 stated:
“These results show conclusively that antibiotic resistance is a natural phenomenon that predates the modern selective pressure of clinical antibiotic use.”

A recent study showed that antibiotic resistance in bacteria is surprisingly ancient. Research published in the Journal PLoS ONE found that bacteria that had been “isolated from human contact for more than four million years” in a cave in New Mexico were already resistant to antibiotics.

While the date is suspect, there is no way of explaining the discovery away as “evolution in action”.