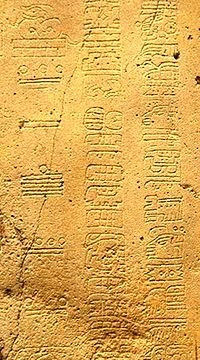 The ancient Mayan calendar is said to predict that the world will end on 21st December, 2012. Image courtesy of Wikipedia.

”The world is coming to an end. The planet Nibiru, discovered by the ancient Sumerians, will collide or come very close to Earth on December 21, 2012 and put an end to our civilisation.” This is what we are told on many blogs and websites.

How credible is this scenario?

At least Hollywood has turned it into dollars. The film 2012, directed by Roland Emmerich, released on Friday, November 13, is based on the assumed ending of the ancient Mayan calendar.

Wait a minute. Our calendar ends on the 31st of December but this does not necessarily mean that the world will end.

There is a further problem with this end of the world scenario. In contrast to what some conspiracy theories claim, the planet Niburu does not exist.

Several decades ago, Zecharia Sitchin, a science fiction author, claimed he had found ancient Sumerian manuscripts that describe the discovery of a planet called Niburu. However, no archaeologist has verified the existence of such texts.

Niburu could possibly be associated with the Babylonian god Marduk who is not exactly known to be a planet.

The hype concerning 2012 has been influenced by both new age ideology and evolutionary faith in the existence of intelligent life in outer space. A psychic named Nancy Lieder claims she had been contacted by aliens living on a planet revolving round the star Zeta Reticuli. They warned her of a planet that would collide with Earth in May 2003.

When May 2003 came and went without the predicted collision, the catastrophe was postponed until 2012 and associated with the Mayan calendar and the hypothetical reversal of Earth’s magnetic poles that are supposed to cause great upheavals.

Describing impending catastrophes and the end of the world have proved to be efficient means of making money in the past.

G.K. Chesterton, a famous British author, wrote that people who espouse materialism are credulous and easily believe everything.

When one rejects the Bible’s revelation, one might soon come to believe in UFOs, parapsychology, horoscopes and even the Mayan calendar.