Is there panic in the air? 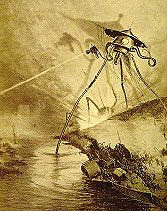 Alvim Correa's image in a 1906 French translation of War of the Worlds. Wikipedia

The War of the Worlds is a science fiction novel about a Martian invasion of Earth. Originally written by George Herbert Wells in 1898, it was later adapted by Orson Welles and broadcast as a radio drama.

The program was aired on October 30, 1938. It had been an eventful year, with the Anschluss of Austria still fresh on people’s mind. The drama consisted of news bulletins, starting with a strange flash on Mars and progressing to a Martian landing and a devastating war.

Many listeners were carried away by what they heard. The October 31 New York Times reported panic on the streets. While the media probably exaggerated the outcome of the drama, it differed considerably from the average Sunday picnic.

H. G. Wells (1866-1946) was an ardent evolutionist who believed that the Darwinian great story was fact and that end of human evolution was still nowhere in sight. The Time Machine (1895) discloses his views about ongoing human evolution. Like many contemporary Darwinists, he thought eugenics was the way to stop the degeneration of the human race.

It seems that today’s Darwinists have also found a formula for stopping another form of degeneration – that of science itself.

Once again, there seems to be a panic of sorts in the air. Evolutionists have resorted to law suits and intimidation to silence dissidents because they believe that doubting Darwin will mean the end of all scientific progress. The Council of Europe goes even further. It believes creationism is a threat to human rights. It is probably needless to add that to the Darwinist, “creationism” is a catchword that includes all forms of dissent from Darwin.

So, the question is: might there be some panic in the air?