Israeli Newspaper Asks: How Many Animals Were on Noah’s Ark? 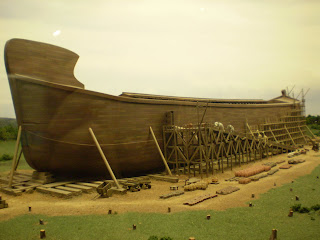 
Noah’s ark has once again made it to news headlines. Saving today’s species has given risen to a comparison with the vessel that spared Noah's family and representatives of all land animals from a watery grave.

According to Israeli Newspaper Haaretz, James Edwards, executive director of the Encyclopedia of Life, said that the Genesis account of Noah “squeezing” all animals on the ark was “of course physically impossible”.

To its credit, Haaretz also allowed creationists to say what they believe. “Believers in the Bible note that the Ark described in the Book of Genesis was a giant ship by ancient standards about 140 meters (460 ft.) long -- far from the tiny vessel depicted in many children's books with giraffes' heads sticking out the top.”

The article pointed out that Noah only had to take land animals and birds on board. Haaretz interviewed Dr. David Menton, an associate professor emeritus of anatomy at Washington University. He said that whereas most of the species biologists still hope to discover are tiny organisms, Noah only had to take about 16 000 animals on the ark. Noah did not have to take “organisms known to survive extensive flooding -- such as insects and worms.”

Dr. Menton explained the difference between the biblical kind and biological species. He used the dog kind (dogs, wolves, coyotes and dingoes) as an example. Noah only had to take a pair of the dog kind to ensure that canines would not die out. Menton added that to save space Noah might have taken juvenile creatures on board since some dinosaurs, such as T. rex and sauropods, could be very big as adults. Some sauropods could grow to become 30 metres (98 feet) long.

Some other scientists that Haaretz interviewed remained skeptical. They either found it hard to believe that there was room for all animals in the 3-deck, 30 000 ton vessel or that the different species could thrive on the ark. This was at least partly due to their lack of knowledge about the pre-flood world. Jesse Ausubel, chairman of the Encylopedia of Life at Rockefeller University in New York City said: "Noah would have to be a very skilled heating and ventilation engineer ... to have polar bears and iguanas on the same boat…."I'm not sure about the volume but ... they wouldn't all want the same conditions in their cabins."

This problem can be easily solved. Noah only took one pair of the bear kind on the ark. Polar bears came into being at the time of the ice age that begun after the flood. Yet this change is not Darwinian evolution, as anyone familiar with the build-in diversity of the dog kind (from wolves to Chihuahuas and Great Danes) would realise.

Incidentally, there is an abundance of geological evidence for a global flood. Read more here.

Just how many animals actually traveled on Noah's Ark? Haaretz 15 May 2008http://www.haaretz.com/hasen/spages/983715.html

The Haaretz article was based on a Reuters article written by Alister Doyle entitled How did Noah's Ark float? New species cram aboard. (15 May 2008) http://www.reuters.com/article/latestCrisis/idUSL08114450
Lähettänyt bwanajoe klo 12:23