Lucy: "But Grandmother! What big feet you have" 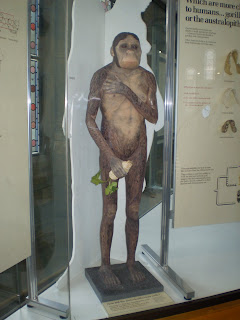 “Mom, look at those tiny dolphins.” A little girl had just left the dolphinarium and was staring at small tropical fish in an aquarium. Having looked at dolphins for the past hour or so she naturally assumed that the small creatures that were swimming around in the water were also dolphins.

Very often our presuppositions determine what we think we see. As adults, our presuppositions are often based on our worldview. Thus, throughout the world natural history museums present our supposed foremother Lucy (Australopithecus afarensis) as having big feet although the toe bones have never been found and Lucy’s arms are clearly of the curved kind we associate with monkeys. They are well suited for hanging from trees but cannot be used for typing, for instance.

The National History Museum in London also presents Lucy as a roughly one meter (three feet) tall, big-footed ancestress of Homo sapiens. Why is this so? No one has found a better candidate and the famous Laetoli footprints of Tanzania are much larger than the typical small prints a monkey would leave. But they have been dated appoximately as old (about 3.2 million years) as Lucy.

We should perhaps congratulate the evolutionists for their brilliant logic: since the representatives of the Homo family had not yet evolved and since the footprints show without a shadow of doubt that three creatures walked on two feet some three million years ago, Lucy must have had big feet.

Radiometric dating methods are supposed to be reliable but few non-geologists are aware of the assumptions that lie behind each method. The methods are reliable only if three conditions are met:
1 Nothing except radioactive decay has altered the amount of parent isotopes (the original radioactive elements) and daughter isotopes (elements produced by the radioactive decay of other elements).
2 When the rock was formed, it contained a known amount of daughter isotopes (assumed to be zero).
3 The decay rate has always been constant.

Scientists can actually never be sure of any of these conditions. Professor Marvin Lubenow gives an interesting insight into the reliability of dating methods in his book Bones of Contention. In 1969 Richard Leakey discovered the skull known as KNM-ER 1470 (KNM stands for Kenya National Museum, where it is displayed, ER is East Rudolf, the region where it was found, and 1470 is the museum’s acqusition number). The skull has many similarities with modern man but it was dated at 2.9 million years. The find was fiercely debated in the prestigious journal Nature for ten years, during which its age decreased by a million years.

Could it be possible that presuppositions have led us astray in Lucy’s case, also? We might need a little girl to say, "But Grandmother! What big feet you have!" And perhaps the girl might also wonder why Grandmother looks much younger that she should.

You can read more about Lucy here. and here.
Lähettänyt bwanajoe klo 12:16