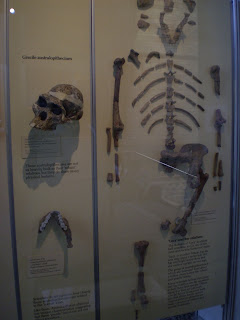 The old lady's remains on display

In 1974 Donald Johanson’s team found the bones of an extinct hominid in the Afar region in Ethiopia. The same night John Lennon and Paul McCarthy’s song Lucy in the Sky with Diamonds was played in their camp, giving the name for the find. In a LiveScience column, Cornell University anthropologist Meredith F. Small calls Lucy the crown jewel of ancient full skeletons.

Small’s characterisation is an exaggeration. Actually, only 40 per cent of the bones of the skeleton were found but Lucy is still by far the most famous specimen of Australopithecus afarensis, which has been proposed as a link between apes and the genus Homo. In other words, Lucy has been characterised as our grandmother.

Lucy’s bones have been kept in Ethiopia but now they are on a long tour of the United States. The tour might have something to do with the lively and occasionally fierce origins debate that shows no signs of abating. For the past 34 years Lucy has been used as a poster girl for evolution to bolster up the view that apes and humans have a common ancestor.

When a new fossil known as the Lucy child, i.e. the almost complete skeleton of a three-year old Australopithecus afarensis, was unveiled in Dikika, Ethiopia, in 2006, the popular press and science journals advertised it as a human ancestor. However, an in-depth study revealed that it was more gorilla-like than supposed and the hyoid bone that is associated with the capacity for speaking resembles that of a chimpanzee. And chimpanzees are not known for their oratory skills.

Last year brought some more bad news for Lucy’s status as our supposed grandmother. Professor Yoel Rak and colleagues at Tel Aviv University in Israel published a study in the online edition of PNAS, the Proceedings of the National Academy of Sciences. They compared the mandibles or lower jaw bones of gorillas, chimpanzees and modern humans and reported that since the bones of apes are morphologically almost identical to those in both Australopithecus robustus and Australopithecus afarensis but different in modern humans, this casts doubt on the view that regards Lucy as an ancestor of Homo sapiens.

Lucy’s American tour will no doubt continue but it should probably have to include a warning that the old lady is not a human ancestor.

Please read the previous post for more on Lucy.