A daytime fireball in the UK 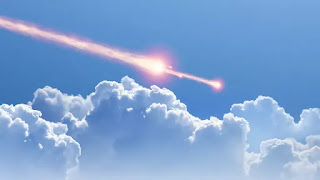 A  meteor  was seen in England  this week. First, they people who saw this taught that the noisee was produced by fighter jets, but the Ministry of Defence quikcly announced that this couldn't have been the case, according to the BBC.

Thanks to satellite images, it was later confirmed to be a fireball meteor, according to the BBC.

Asteroids and meteors bring to mind the catastrophe that will touch Earth from time ti time, for instance in destruction t  in Russia in the early part of   the 20th century, and   in the book of Revelation.

Some people think that the earth was riddled with water a  through a meteor.

A rare daytime fireball meteor triggered a loud sonic boom across parts of the United Kingdom and France over the weekend.