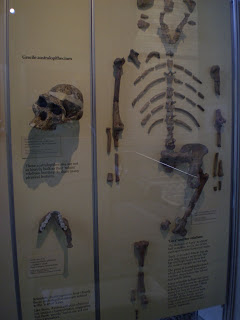 Lucy’s bones. The leg bones are still missing, so theories of how our assumed grandmother walked are not based on facts.

Lucy’s upper limbs resembled those of modern chimps. This suggests that our assumed grandmother Australopithecus afarensis, as she is more formally known, spent a lot of her time in trees.

This is the take-away message from a recent study conducted by researchers at the Johns Hopkins University and the University of Texas at Austin.

The research, based on CT scan images of Lucy’s bones, was published in the journal PLOS ONE. Science Daily summarizes the findings:

“Analysis of the partial fossilized skeleton, the investigators say, shows that Lucy's upper limbs were heavily built, similar to champion tree-climbing chimpanzees, supporting the idea that she spent time climbing and used her arms to pull herself up.”

However, when it comes to Lucy’s feet, bias creeps in, as it tends to do in research on our assumed ancestors:

“In addition, they say, the fact that her foot was better adapted for bipedal locomotion (upright walking) than grasping may mean that climbing placed additional emphasis on Lucy's ability to pull up with her arms and resulted in more heavily built upper limb bones.”

This assumption is based on evidence that is still missing. The foot bones have not been found. But the Laetoli footprints have prompted some evolutionists to assume that Lucy walked on two feet, just like us.

While the Laetoli footprints have been dated a mere “400,000 years” or so older than Lucy, there is a huge logical gap between her and the footprints.

They look exactly like human footprints. No tree dwelling ape could possibly have made them.

Moreover, Lucy’s bones were found in the Afar region in northern Ethiopia. Laetoli is in Tanzania. The distance separating them is roughly a thousand kilometres (600 miles), as Kenya happens to separate the two East African countries.

In other words, there is no reason to believe that Lucy’s kin made those marks.

“Exactly how much time Lucy spent in the trees is difficult to determine, the research team says, but another recent study suggests Lucy died from a fall out of a tall tree. This new study adds to evidence that she may have nested in trees at night to avoid predators, the authors say. An eight-hour slumber would mean she spent one-third of her time up in the trees, and if she also occasionally foraged there, the total percentage of time spent above ground would be even greater.”

There you have it, ladies and gentlemen: Lucy was a tree-dwelling ape.