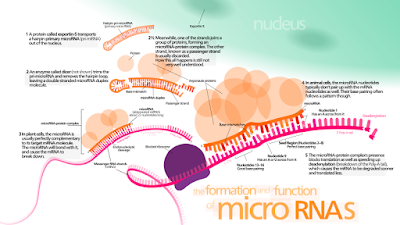 No room for Darwinian randomness in the miRNA world. Image courtesy of Kelvinsong, Creative Commons (CC BY 3.0).

Randomness is one of the keywords of Darwinian evolution, but we see an entirely different picture in the real word. Take, for instance, the part of our genome once dismissed as junk because researchers did not know what it did.

Now, researchers are beginning to understand that non-coding RNA has several essential functions. According to an article posted on News Medical:

“Gene expression in cells and tissues of every complex organism is precisely controlled and largely dependent on different conditions (such as development, changes in the environment, diseases or drugs). Various cells and organ systems within such organism (including humans) contain different gene expression profiles, thus proper understanding of regulatory mechanisms involved in such expression represents one of the key issues in genomic medicine.”

The language is anything but Darwinese, and there’s more to come:

“Non-coding RNA molecules have a role in plethora of regulatory events – from controlling the number of copies in bacterial division to X-chromosome inactivation in mammals. Recent analyses of the human and animal genomes have shown that most of RNA transcripts do not code for proteins (i.e. they are messenger RNAs or mRNAs), but are instead noncoding RNAs (ncRNAs).

MicroRNAs (or miRNAs) comprise a novel class of small, non-coding endogenous RNAs that regulate gene expression by directing their target mRNAs for degradation or translational repression. Their discovery added a new dimension to the understanding of complex gene regulatory networks in humans and animals alike.”

The article also highlights the importance of microRNAs:

“miRNAs represent small RNA molecules encoded in the genomes of plants and animals. These highly conserved 22 nucleotides long RNA sequences regulate the expression of genes by binding to the 3'-untranslated regions (3'-UTR) of specific mRNAs. A growing body of evidence shows that miRNAs are one of the key players in cell differentiation and growth, mobility and apoptosis (programmed cell death).”

In other words, there is nothing even remotely Darwinian in microRNAs.

Medical researchers can no longer ignore the existence of miRNAs as we have roughly a thousand of them and they appear to be vital for our health.

In the animal kingdom, they have knocked down Darwin’s Tree of Life.

Other forms of RNA are likewise timely reminders of the defects of evolution. Messenger RNA plays a major role in wound healing.