Jumping to Conclusions about Stickleback Evolution? 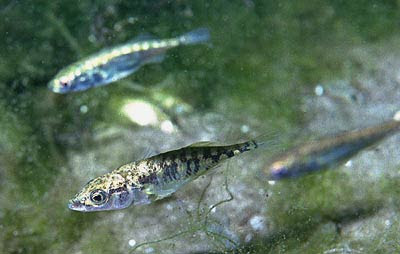 Recently, Nature news published an article on assumed stickleback evolution. Research conducted by David Kingsley, an evolutionary biologist at Stanford University in California, and colleagues, prompted the journal to conclude that freshwater sticklebacks “have evolved from marine ancestors on many different occasions”.

Kingsley and colleagues reported their results in Nature. According to Nature news,

“The similarities between freshwater populations worldwide suggest that the fish do not evolve new features from scratch each time, says Kingsley. Rather, a few ocean-dwelling fish may retain ancient genetic adaptations to freshwater living that allow them to colonize new sites. The first few generations display mixed or intermediate features, but eventually the genes that allow the fish to adapt to fresh water dominate.”

Whereas marine sticklebacks have armoured plates and defensive spines, their freshwater cousins do not.

A phenomenon akin to what has happened to the beaks of Darwin's finches seems to have happened here also. While finches have various kinds of beaks, all finches remain finches.

“On a genome-wide scale, we’ve found a whole set of regions being used over and over to adjust to new environments,“ says Kingsley. “We’re able to study the molecular basis of vertebrate evolution.”

However, like finches, sticklebacks have the ability to adapt to their environment. This is not evolution in the Darwinian sense of the word.