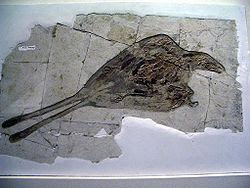 Confuciusornis sanctus was a bird that according to evolutionary thinking lived at the time of the dinosaurs. Two long tail feathers can be seen in the fossilized bird. Image courtesy of Wikipedia.

An international research team has developed a new method for finding out the colour of fossilized feathers, scales and skin by looking at traces left by melanin.

Melanin is a pigment that for instance gives skin and hair its colour.

Nature news recently reported on the breakthrough originally published in the journal Science last week. Researchers at the SLAC National Accelerator Laboratory in Menlo Park, California, used x-rays to examine traces left by soft tissue in fossils by applying a method that did not damage the fossil.

The researchers were able to find out the colour of the feathers of Confuciusornis sanctus, for instance. C. sanctus was a crow-sized bird that lived at the time of the dinosaurs, some 120 “million years” ago.

They also compared fossils to corpses of animals that had died recently and noticed that fossilized squid ink closely resembles the ink of modern squids.

The researchers thus found out that a bird remains a bird and squid ink remains ink for a surprisingly long time.