Who lost the first habitable planet? 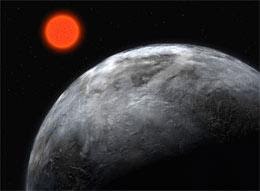 Three years ago Gliese 581c made headlines. It was supposed to be an Earth-like planet. Image courtesy of ESO.

Astronomers who were searching for a habitable planet rejoiced when at last they found Gliese 581g - a planet that seemed to orbit a red dwarf well within the habitable zone. A least one scientist advocated sending a manned probe to examine the planet that is just 20 light years from us.

The rejoicing turned out to be short-lived, however. On Monday astronomers at the Geneva Observatory in Switzerland announced that they were unable to detect any signs of Gliese 581g. The team, led by Francesco Pepe, checked the observations made of the planet with a 3.6 metre telescope in Chile.

Presenting their results at an International Astronomical Union symposium in Turin, Italy, they said that they did not find any evidence of Gliese 581g.

Steven Vogt, who initially announced the discovery of the planet, has not given up hope. He thinks that further research might yet show that Pepe and his team were mistaken.

Often researchers ”find” that what they are looking for. A century ago, Percival Lowell believed he saw evidence of life on Mars. He wrote in the journal Nature that ”Mars is habitable by organisms not essentially different from those with which we are acquainted.”