Creation or Evolution: It’s a Question of the First Occurrence of Death 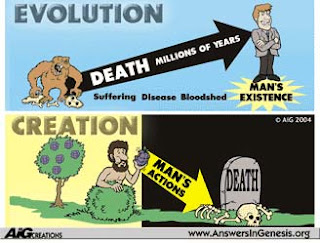 Two Stories of Death. Image from Answers in Genesis

(This post is a reply to feedback I received recently to my article New Scientist Uses Theological Arguments In Trying to Disprove the Bible. )

Neo-Darwinian evolution is basically an atheistic attempt to explain reality. Unfortunately modern science has ruled out God and only accepts naturalistic explanations. Although some Christians accept evolution, it is in conflict with the biblical model of creation.

Evolution is an attempt to elevate man’s views above God’s Word.

In the evolution model, death has been present from the very beginning. According to the Bible, God created a perfect world. The New Testament teaches that death came into the world through one man’s (Adam’s) sin (Romans 5:12-14). Evolutionists have to interpret the Fall figuratively, and that is something the New Testament writers did not do. Jesus did not die for figurative sins but real ones.

Genesis 1-11 does not use the primary poetical device of the ancient Hebrews, viz. parallelism. A straightforward reading of the text shows that it was understood as being history. Indeed, Jesus and St Paul understood Adam as a literal man, created at a particular time in history as fully human.

The Bible teaches special creation, not a Darwinian idea of descent with modification. Regardless of the often mentioned DNA difference of 1-2% (the American Museum of Natural History puts the difference at 1.2 % but recent research at about 5%) between chimpanzees and humans, there seems to be an enormous gap between humans and apes. Only man was created in the image of God.

Another great difference is the issue of time. Jesus and the New Testament writers believed in a creation that occurred thousands of years ago. Billions of years are evolutionary assumptions. See the recent evidence from diamonds.

It is thus either evolution or creation. St. Paul sums up the evidence for creation in Romans 1:20: “For since the creation of the world God's invisible qualities—his eternal power and divine nature—have been clearly seen, being understood from what has been made, so that men are without excuse.”
Lähettänyt bwanajoe klo 05:36