New research: The Y chromosomes of the Chimpanzee (Pan troglodytes) and humans are ”horrendously different from each other” 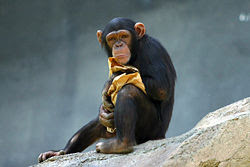 The assumed genetic closeness of humans and chimps has for long been interpreted as a proof of Darwinian evolution. Image courtesy of Wikipedia.

The Y chromosomes of the Chimpanzee (Pan troglodytes) and humans are ”horrendously different from each other”. This is how David Page, a researcher at the Whitehead Institute for Biomedical Research in Cambridge, Massachusetts, puts the results of the recent sequencing of the chimp genome.

Page and his colleagues published the results of the differences between human and chimp Y chromosomes online in Nature on January 13.

From an evolutionary perspective, the results were astonishing. They make the Darwinian explanations of the genetic similarities between humans and chimps sound somewhat outdated. According to Nature News, ”Page's team found that the chimp Y chromosome has only two-thirds as many distinct genes or gene families as the human Y chromosome and only 47% as many protein-coding elements as humans.”

It seems that the chimps have been exceedingly careless.

However, ”even more striking than the gene loss is the rearrangement of large portions of the chromosome. More than 30% of the chimp Y chromosome lacks an alignable counterpart on the human Y chromosome, and vice versa.”

Natural history museums and biology textbooks have often advertised the genetic closeness of humans and chimps. Popular literature puts the difference at 1-2 per cent. However, the figures are based on a deliberate choice of the parts of the genome that were compared.

The new research will probably give rise to an assortment of explanations. Researchers are already saying that in contrast to humans, chimps must have evolved exceedingly fast.

The differences might have a much more logical explanation, however, viz. the genomes have always been very different. In other words, the Genesis model of after its kind is still a very robust explanation.