BBC: ”East Jerusalem is not a Jewish city” 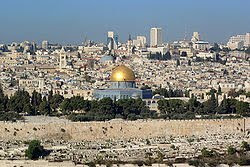 In BBC's documentary Panorama Jane Corbin takes a walk in Jerusalem and suggests that practically everything Israel does in East Jerusalem is illegal since in her view it is not a Jewish city.

In reality, East Jerusalem was an Arab city only from 1949 to 1967 after the Jordanians expelled the Jews from their homes. In addition, it might be good to remember that up to 1865 ”Jerusalem” consisted of what is now known as East Jerusalem. The other parts of the city were built later.

Panorama gives the impression that many Israelis are scoundrels who will do anything to keep East Jerusalem in Jewish hands. The programme makes a big issue of Palestinian sufferings.

Corbin does not seem to know about the ethnic cleansing of 1948, when the Jews of East Jerusalem were forced to leave the dwellings that had been theirs for decades if not centuries.

Panorama is obviously not interested in objective reporting. Incidentally, the British have had a pro-Arab bias almost since time immemorial. For instance, in the 1948 war they sided with the Arabs. Recently a British MP claimed that the Israelis are playing mini-Mengele.