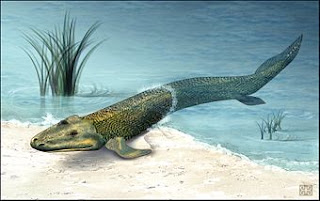 Tiktaalik was assumed to be the ultimate proof of Darwinian evolution. However, a new discovery challenges its intermediary status. Image courtesy of Wikipedia.

In April 2006, Nature published a paper on Tiktaalik roseae, a fish fossil found on Ellesmere Island in northern Canada. Since then, this ”375-million”-year-old fish has been feted as the intermediary between fish and tetrapods.

Evolutionists often forgot to mention that Tiktaalik roseae belonged to the same class of Sarcopterygii as the coelacanth Latimeria chalumnae that according to the fossil record has been dated as roughly the same age or 380 million years.

Latimeria was long assumed to be the intermediary between fish and land animals but then in 1938 the first living specimen was caught. It was not the only one to survive the ”age of the dinosaurs”, however. Some 200 living coelacanths have been found. In contrast to what Darwinists used to believe, none of them uses its fins for walking at the bottom of the ocean.

Called fishapod by some ardent Darwinists, Tiktaalik had great propaganda value in the debate on worldviews. A science journalist lauded it as a fish that could do push-ups. He could not deduce this from the fossil itself but this was not the only time evolutionists had resorted to storytelling to supplement missing data.

Recently, Nature published research that challenges Tiktaalak’s intermediary status. Grzegorz Niedźwiedzki, a fossil-footprint specialist at the University of Warsaw, Per Ahlberg, a paleontologist at Uppsala University, and colleagues reported on fossilized tracks found in Poland. Dated to 395 million years, they were made by a land animal that had four legs.

They were not the footprints of a fish. In other words, an animal walked on dry land before the earliest fish left the water for a much greener pasture on land.

Tiktaalik has become an icon of evolution. No wonder, then, that some Darwinists are reluctant to accept the full import of the Polish footprints.