Ethics professor: Dolphins should be treated as ”non-human persons” 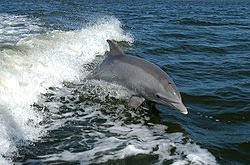 Thomas White, a professor of ethics at Loyola Marymount University in Los Angeles, has caused a stir by suggesting that dolphins should be treated as ”non-human persons".

While dolphins certainly are intelligent animals capable of learning new tricks, regarding them as persons reveals more about the worldview of the one making the suggestion than about bottlenose dolphins.

This is not the first time that animal rights activists have tried to treat animals as persons. In January 2008 a chimpanzee named Matthew Hiasl Pan made headlines throughout the world as activists attempted to get the Austrian High Court to grant it the status of a person. The court refused to do so, however.

In June 2008 the environmental committee of the Spanish parliament approved a resolution that called for the right to life and freedom for great apes.

Unfortunately, animal rights activists often belittle human rights. Their ideology stems from Darwinian evolution. In their view, a human being has no more value than a field mouse. Bioethics professor Peter Singer, who is an intellectually honest atheist, for instance thinks that it is more ethical to kill human infants – even up to 28 days after their birth – than to eat animal meat.

We should view the current dolphin discussion from this perspective.

Occasionally, the plight of captive dolphins gives rise to more discussion than the killing of unborn babies for financial excuses.

It is deplorable that people have at times mistreated dolphins. However, we cannot solve the problem by pretending that they are human beings while we keep on trampling on the rights of unborn humans. We can let dolphins be animals and still take an ethical approach to them.