New Scientist: How should we communicate with aliens? 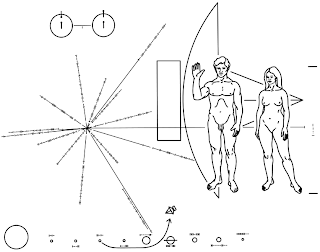 New Scientist discusses the issue of communicating with aliens. The same question was brought up in the 1970s when the first message addressed to ETs began its long voyage through space. Image courtesy of NASA.

The latest issue of New Scientist strays far from empirical science. The popular magazine takes up the issue of communication with aliens. While the SETI (Search for Extraterrestrial Intelligence)project has cost millions of dollars, euros and pounds, it has not produced any results. ETs have been as unwilling to reply to humans as the ancient Philistine god Dagon.

In any case, Stephen Battersby thinks that ETs are social beings who at least have eyes and some kind of limbs and that they eat meat and procreate sexually.

Battersby does not mention that we do not have any proof of the existence of ETs.

The belief in UFOs and aliens stems from Darwinian evolution. The evolutionist believes that since (in his view) life began randomly on Earth it must also have developed elsewhere in the universe.

However, one needs more than just water to create life. One also needs information and a sender. In addition, life can only come from life, and thus the Genesis model is a much more logical explanation than abiogenesis (spontaneous generation) or panspermia (the view that life came from outer space).