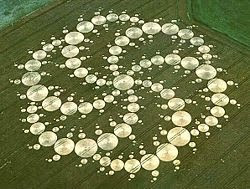 Although UFOs and crop circles have made headlines in the UK press, few if any have seen little green men lately. Image courtesy of Wikipedia.

The most recent casualty of the current economic recession is UFO research. The British Ministry of defence will shut down its UFO investigation unit. Set up over 50 years ago, the researchers at the unit have not seen a glimpse of an authentic flying saucer or a little green man.

While UK citizens have sent thousands of e-mails to the unit and used a special hotline to report their observations, they have not succeeded in convincing the researchers that the phenomena they have kept on seeing originate from outer space.

Perhaps the foremost reason for believe in UFOs and little green men is Darwinian evolution, although the money makers at Hollywood can hardly wash their hands. Those who believe that life developed randomly on Earth will also believe that it developed on other planets, and are expecting to find support for their view.

However, since the origin of life needs more than just water, other UFO research institutes might also run out of pounds, euros or dollars before any little green men appear on planet Earth to save us from impending climate change.