A giant Noah’s Ark to be constructed in Kentucky 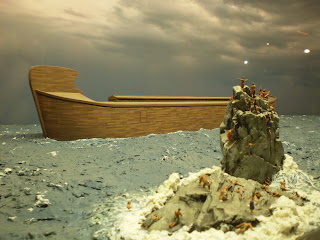 Noah’s Ark was not a toy ship.

A huge replica of Noah’s Ark will be constructed in north Kentucky not far from the Answers in Genesis Creation Museum.

Ark Encounter LLC and Answers in Genesis will build a full-scale replica of the ark in Kentucky. It is planned to be ready in 2014.

Genesis mentions that the Ark was 300 cubits long. A cubit was measured from the elbow to the tip of the middle finger. Ancient cultures used different cubit lengths. The ordinary Egyptian cubit was approximately 18 inches or 457 millimetres long, which would make the ark 450 feet or 137 metres long. The Egyptian royal cubit measured 20. 6 inches or 523-525 millimetres. If Moses, who was well versed in Egyptian royal culture, used this cubit, the ark would have been 515 feet (157 metres) long.

The first ocean-going vessel to exceed this length was actually built in the 1860s, so the ark was certainly no small tug boat.

The Flood was a major historical event for which we have plenty of evidence. Consider the following, for example:

While God judged the world, He provided a way of escape for those who trusted in Him by instructing Noah to build a huge ocean-going vessel.