The Indian Army Is Tweeting About Yetis 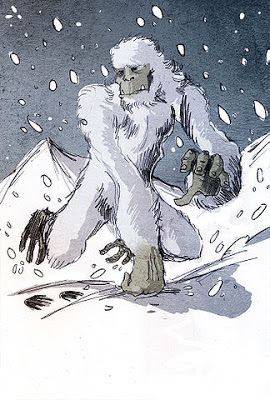 The Indian army has posted a photo in which the Yeti’s footprints (32x15 inches) are clearly visible, but it did not post the creature making them.

in 2017, a study published in the Proceedings of the Royal Society B stated that eight specimens of the yeti happened to be a bear, and one of a dog.

It seems that science needs her hoaxes. In 2009
National Geographic featured four scientific hoaxes, including the Piltdown man, Archaeoraptor liaoningensis and bigfoot (an American imaginery apeman) .

Archaeoraptor liaoningensis is National Geographic’s own production, so to speak. In 1999 the magazine published an article about a feathered dinosaur found in China but had to retrace it the following year since the creature was found to be a hoax.

Archaeoraptor turned out to be a veritable Piltdown bird. The Chinese fossil hunters had combined parts of different species to form a new “transitional fossil” that quickly made news headlines.

Pappas,, Stephanie. 2019. Why Is the Indian Army Tweeting About Yetis? Live Science (30 April).