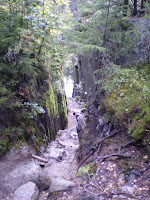 
Helvetinkolu is an approximately 2 meters wide, 38 m high and 40 m long gorge in Southern Finland (62º 02' N 23º 51' E). The name has been mistranslated in some Internet documents as Hell’s Hole. The first part is correct but “kolu” is an old Finnish word that refers to stony ground (i.e. a ground made up of smallish stones) rather than a hole. It is the main attraction in a national park named after the gorge. While the gorge as such is not very large, the entire 49.8 km2 park area is characterised by several other deep gorges. Actually, Helvetinkolu is just one of the smaller gorges crossing a larger gorge. Some of the valleys are filled with narrow but deep lakes, with the walls of the gorges reaching down several tens of meters into the water. There are five such lakes in the area. The lake system is some 12 kilometres long.

In keeping with the odd logic of the name, the lake below the gorge is called Iso Helvetinjärvi (Great Hell’s Lake). In reality there is little hellish about the scenery, except that the gorge, shadowed by the steep walls for most of the day, itself tends to be quite dark. Some well-known 19th and early 20th century Finnish painters (Akseli Gallen-Kallela, Hugo Simberg ), poets (J. L. Runeberg) and composers (Jean Sibelius) drew inspiration from the view at a time when Finland was still part of the Russian Empire and they visited the place often.

According to the evolutionary view, the gorges were formed some 150-200 million years ago. The greyish color of the rocks suggests that they are granite, which is one of the most common rocks in Finland and is especially abundant in the Ruovesi area where Helvetinkolu is situated. Granite is a hard igneous rock formed deep within the earth’s crust. According to the University of Tampere website, the valleys were formed as a result of the rifting of the Earth’s crust. It is indeed easy to see that the gorges are the result of a catastrophe. In some respects, Helvetinkolu and the entire area resemble the Rift Valley of East Africa which, however, is much larger and is assumed by be considerably younger (15 million years before present). In any case, a slow accumulation of the formation in keeping with the original uniformitarian model, is ruled out even by evolutionists.

Dr. Walker’s first classification criterion is the scale of rocks. The Helvetinkolu formations seem to be too small to have been formed during the creation week in Genesis 1 and yet too large to be the result of an isolated disaster or prolonged erosion during the post-flood period, especially since there are several similar formations in the vicinity. The only possible other viable event would be the ice age, but it seems that gliding ice masses would not be able to carve very deep lake basins into hard granite. From a biblical perspective, the most logical explanation would be the Flood.

The second classification criterion is disturbance. The impact of the massive disturbances is clearly visible everywhere. Rocks that are tens of metres thick do not split apart unless there is a fierce geological event.
The next criterion is response to disturbance. While the rock is clearly broken, it shows no evidence of bending though there are some signs of faulting and fracturing.
The three last criteria – the presence of fossils, footprints and coal deposits – do not apply to the Helvetinkolu formations. From a biblical perspective, we would not expect to see much fossils or even footprints so far in the north, since people had obviously not migrated to the area before the flood (or even before the dispersal at Babel described in Genesis 11). While fossils have been found even in the Arctic region, the more temperate climate of southern Finland and the low pH value of the soil do not favour the preservation of fossils, either.
The most probable stage would be the Inundatory Stage during the first 40 days of the Flood, and more specifically stated the Eruptive Phase when (obviously) tectonic action broke the Earth’s crust as “the springs of the deep burst open” (Gen. 7:11).

The gorge walls are standing upright and there is no evidence of bending. The walls are partly covered with lichen and rock plants such as Adder’s fern (Polypodium vulgare), spleenworth (Asplenium) and catchfly (Viscaria). The boulders and stones at the bottom of the gorge could possibly have been deposited later, for example during the Recessive Stage of the Flood or the ice age. It is possible to see marks of weathering, i.e. small cracks on the wall surface, which is probably due to repeated freezing and thawing during the modern period.The ground is usually covered with snow from December to March and the lakes are frozen from about December-January to April. The annual freezing-melting cycle tends to accelerate weathering and soil erosion, but could most probably not form the gorges in the first place.
Thus, it seems that the Inundatory Stage of the Flood is the most logical explanation for the initial formation of the gorge and the nearby lakes.

Geologic formations do not have age tags attached to them. However, from a biblical perspective it is possible to assess the most plausible date for Helvetinkolu Gorge and the adjacent lake valleys. Both the overall picture and the details support the view that they were formed during the year-long global flood described in Genesis chapters 6-8. Just as the name given to the formation speaks of God’s judgement, the genesis of the formation is also a testimony to an event in which God judged the whole world and preserved only those who accepted His offer of salvation.
Lähettänyt bwanajoe klo 05:52