Not All Are Singing 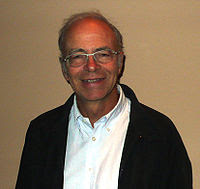 Some atheists have recently expressed the desire that people should stop worrying and enjoy the life they are living. Others, however, take a more dire approach to life.

Bioethics professor Peter Singer is a leading spokesman for animal rights. He believes that grown-up animals should have more rights than unborn humans:

Rats are indisputably more aware of their surroundings, and more able to respond in purposeful and complex ways to things they like or dislike, than a fetus at 10- or even 32-weeks gestation. … The calf, the pig, and the much-derided chicken come out well ahead of the fetus at any stage of pregnancy.

Dinesh D’Souza recently debated Singer. Writing in Christianity Today, he says that Singer “cheerfully advocates infanticide and euthanasia and, in almost the same breath, favors animal rights.” D’Souza suspects that atheists have not overtly advocated Singer’s views since it might discredit their cause.

After all, Singer is “an intellectually honest atheist.”

According to Singer’s ideology, it is more ethical to kill human infants – even up to 28 days after their birth – than to eat animal meat.

This is a corollary of accepting Darwinian evolution. Evolutionists all over the world are celebrating Charles Darwin’s 200th birthday this year.

The film Expelled: No Intelligence Allowed clearly shows that ideas have consequences.

As G. K. Chesterton put it, if men were “not created equal, they were certainly evolved unequal”. In Singer’s dire world human birth is no source of equality.